If you need a little writing break (or something to help you procrastinate writing time), here’s something fun to check out. Writing locations and environments can have a huge influence on an author’s work and process. Sometimes peeping at their office can give some insight into their creative process as well. From neat and tiny tables to chaotic, packed offices, check out these writing desks of famous and successful authors. 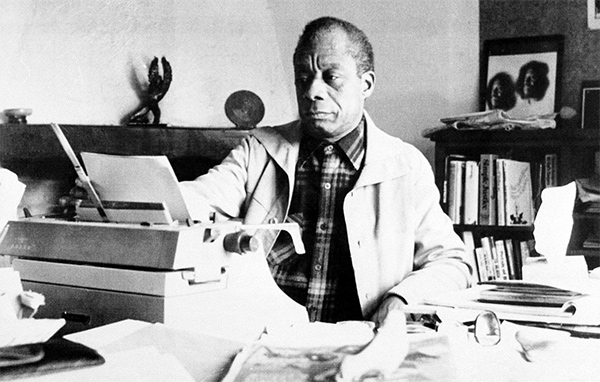 James Baldwin (1924-1987) is a novelist and playwright known for many works including his essay collection Notes of a Native Son. He had unique writing habits because he often had a day job. He would begin his writing work at night once his kids were in bed. Even when he became established enough in his writing career to ditch the day job, he continued writing at night when he would be alone.
Photo source: Writers at Work Tumblr 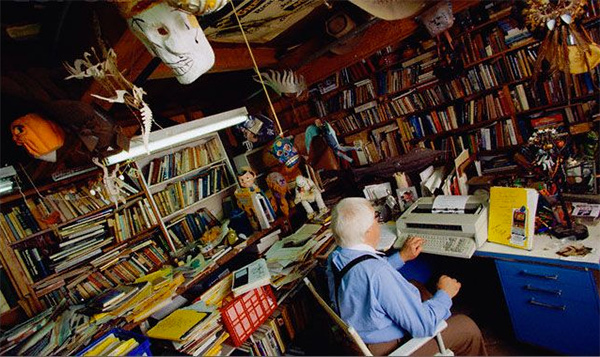 Beloved science fiction writer Ray Bradbury was famous for advising aspiring writers to always write what they loved. He followed his own advice by surrounding himself with things he loved in his office. The room was jam-packed with books and mementos that inspired him. Within the chaos, you can see his trusty typewriter on his desk. He used typewriters throughout his career, even after computers became common. All of his stories and books were written on typewriters. Photo source. 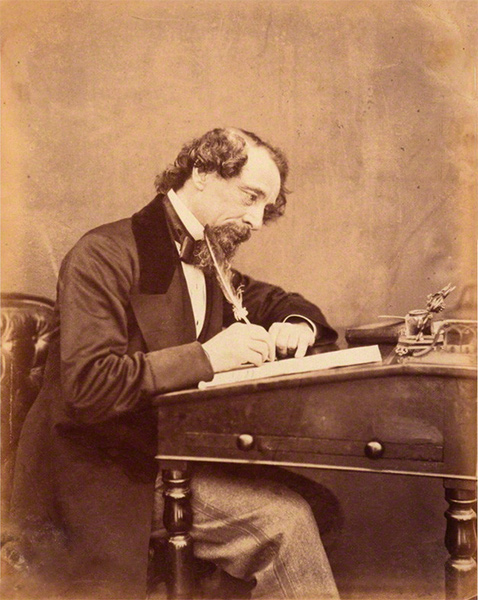 This photo of Charles Dickens is one we’re lucky to have since it was taken in 1858. Considered one of the greatest novelists of the Victorian era, he had a very specific routine to his daily schedule. After waking at 7 am, breakfast at 8, he was in his study working by 9 am, not leaving until 2 pm when he had lunch with his family. After that, he’d take a vigorous three-hour walk. The rest of his evening was relaxed, but this schedule worked well for Dickens who could easily produce 2,000 words a day.
Photo source: Old Photo Archive

Check out some writing advice from Ray Bradbury. 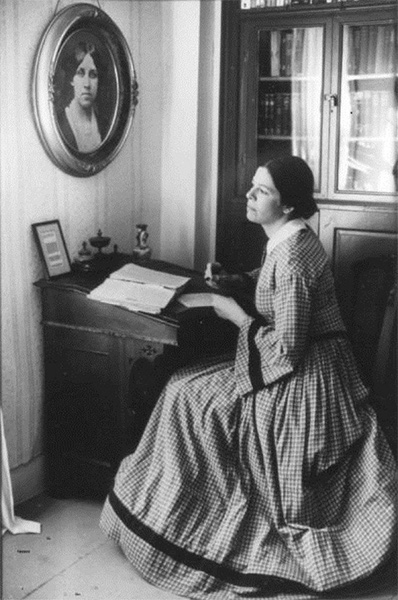 Louisa Mae Alcott (1932 – 1888) is most well known for her classic novel Little Women. She wrote by hand at this writing desk at Orchard House. After years of disappointing reception to her writing, her publisher suggested that she try writing a “girls story.” She composed the book that became Little Women in two and a half months, basing it on her own life experiences with her sister. Neither she or her publishers were impressed by the manuscripts, but it was published and quickly sold out the first edition. The book was an overnight success, that still stands a great literature today.
Photo source: Old Photo Archive 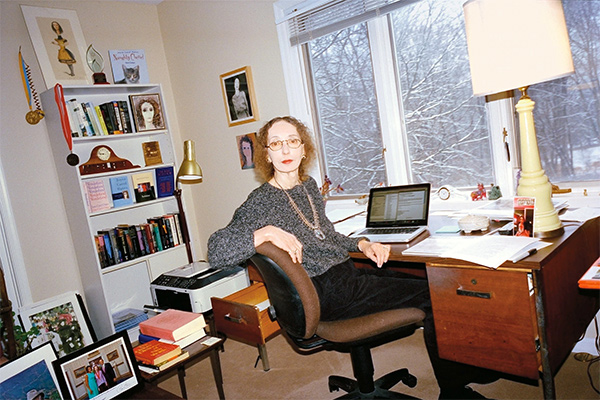 Joyce Carol Oates (b. 1938) writes in a tidy but personal study on the second floor of her home, with her desk position at the window. She makes good use of that view, saying, “I spend much of my time gazing out the window of any writing space I have inhabited.” Her writing process starts by writing longhand notes at the small antique table in her office. Then she moves to work on her laptop at her desk to expand on her handwritten notes. Learn more about Oates’ writing process through her Masterclass.
Source. 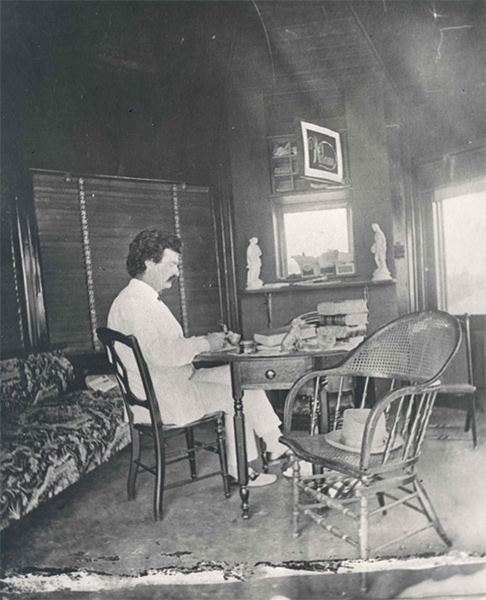 Seen here working at his desk in 1880, Mark Twain (1835-1910) is best known for his books The Adventures of Tom Sawyer and Adventures of Huckleberry Finn. Often quotes, one of my favorite writing quotes from Mark Twain is “Don’t say the old lady screamed. Bring her on and let her scream.” It’s a more dramatic version of the “show, don’t tell” advice.
Photo source: Old Photo Archive 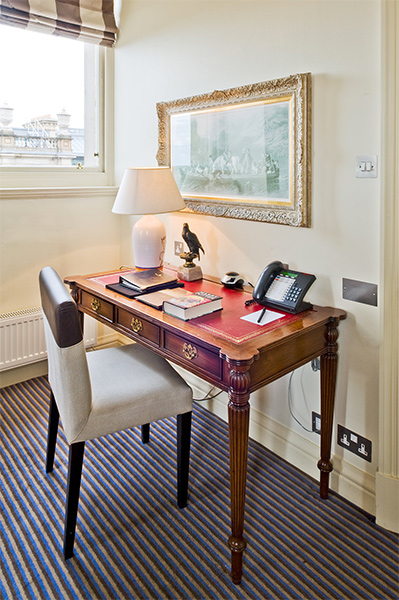 So this isn’t JK Rowling’s (b. 1965) office, but this desk has such an interesting story that it’s worth including. When it was time for Rowling to write the last book in her Harry Potter series, she had a hard time finding a quiet place to work. She decided to go to The Balmoral hotel in Edinburgh to do some writing. The first day went so well, she decided to return and ended up “moving in” during August of 2006. She wrote the entire book at the pictured desk, eventually graffitiing a bust in the room to celebrate the completion of the story. This hotel room is now called the JK Rowling Suite. 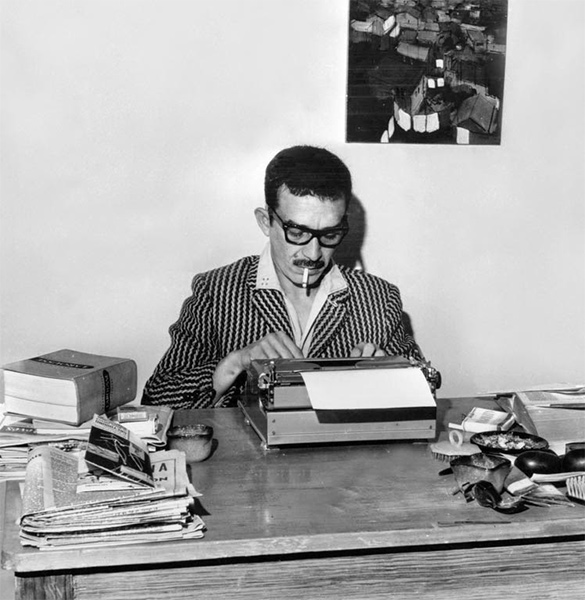 Colombian novelist Gabriel García Márquez (1927 – 2014) wrote on many typewriters throughout his life (you can see more photos at the source). His parents gifted him one when he was 21. He pawned the typewriter and it went missing during El Bogotazo, the riots following the assassination of Jorge Eliécer Gaitán on April 9, 1948. Fortunately, that didn’t slow his acquisition of other typewriters, which allowed him to complete many compositions including One Hundred Years of Solitude.
Source. 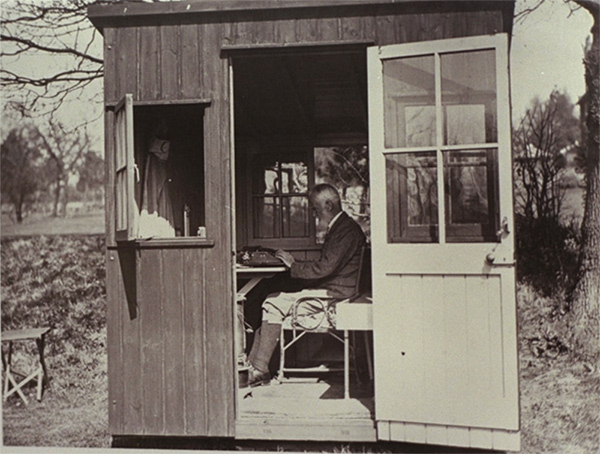 George Bernard Shaw has one of my favorite “offices.” His is actually a writing shed, built in the garden of his villa known as “Shaw Corner.” While he had a traditional study, most of his writing happened in the shed, which was designed to rotate so he always had the best light to work in. You can see more photos here. 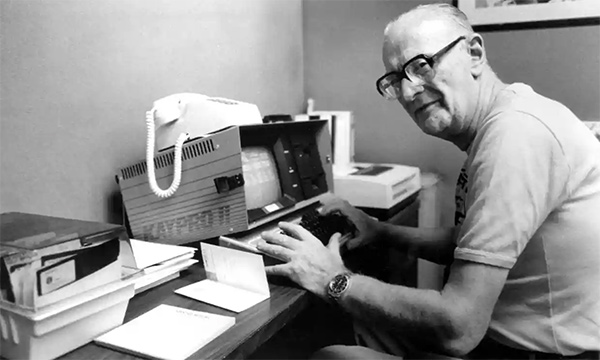 Well known for writing 2001: A Space Odyssey (both the screenplay and the novelization, this photo is Arthur C. Clarke in 1984. A methodical writer and a perfectionist, he didn’t let life’s challenges stop his writing. When he was semi-paralized in 1962, he wrote his juvenile novel Dolphin Island by hand in a hospital bed. He typed all his own stories and essays well into his 80s, when he had to turn to dictation. 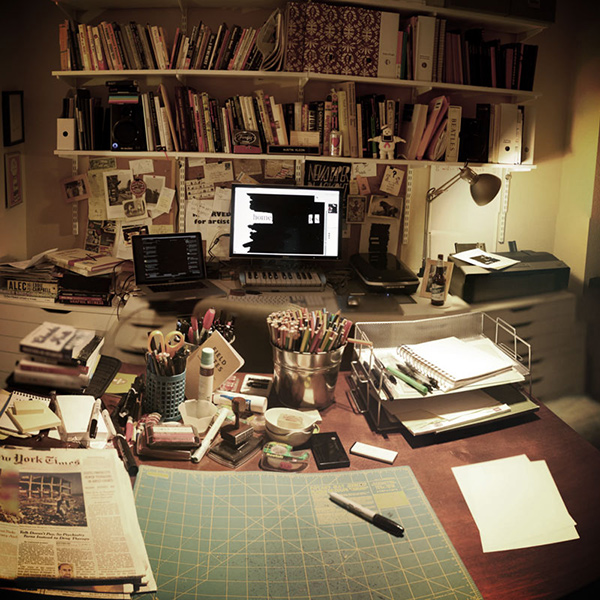 Austin Kleon is an artist and writer (most well known for his NY Times Bestseller Steal Like an Artist). He keeps two desks in his workspace that he refers to as his “analog” and “digital” desk. The analog desk has nothing electric on it, just markers, pencils, paper, etc. He finds this space is helpful for creating new work and avoiding online distractions like social media. The digital desk is home to his computer and other gadgets like a Wacom tablet and MIDI keyboard. See more of his office set-up at the source. 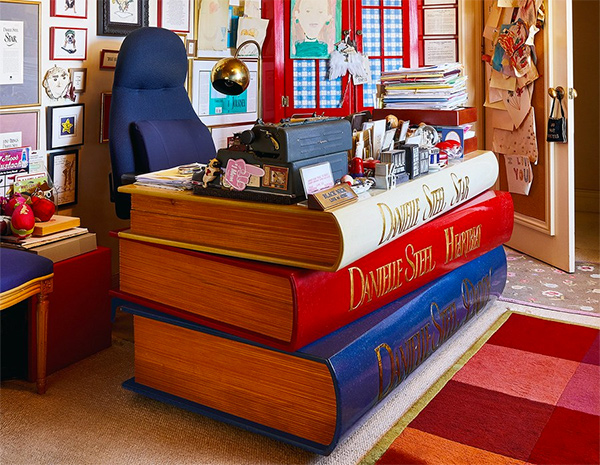 Danielle Steel is one of the biggest bestselling authors and she has a desk to match her huge success. In fact–her desk is literally her best selling books. In her office at her home in San Francisco, Steel had this custom made desk created to look like a stack of three of her books. The focus of her desk is the 1946 Olympia standard typewriter one which she’s composed 163 books and still uses. She keeps her office filled with mementos and other things she loves. Check out more photos at the source. 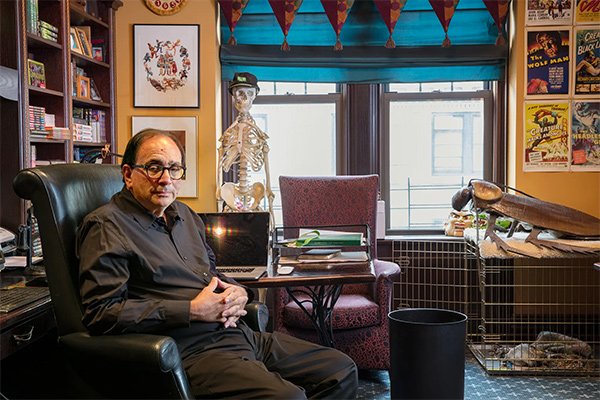 It’s no surprise that noted children’s horror author R.L. Stine has a few creepy things in his writing office: like a giant toy cockroach and a skeleton. Most well known for his “Goosebumps” series, Stine lives in a co-op in NYC that he’s own for over two decades. When asked about how he writes, Stine says he has to know the title first, then the ending so he can figure out how to surprise the reader. You can learn all the secrets of Stine’s writing process from his Masterclass.
Source. 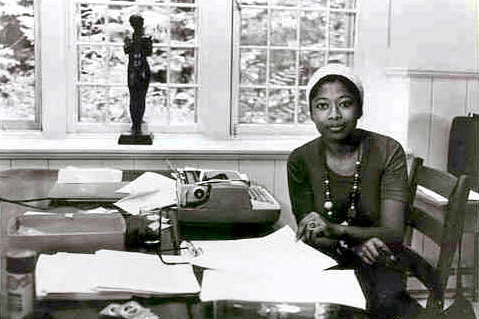 Alice Walker (b. 1944) is most well known for her novel The Color Purple which has been adapted to a movie and a Broadway musical. For three decades of her writing career, Walker wrote every morning or at least set that aside as dedicated time to think about her writing. She found this helped increase her creative receptivity.
Photo source: Writers at Work Tumblr 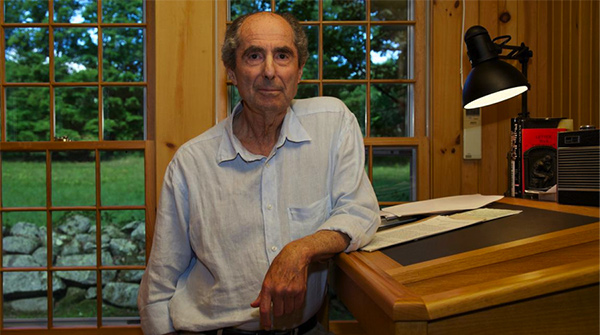 Before he retired from writing, Philip Roth exclusively used standing desks, with one in his Upper West Side work studio and another at his house in the woods of Connecticut. He keeps his desks near windows and says he would pace for about half a mile for every page he writes.
Source.

Need your own writing desk? Check out these corner desks with hutches, white writing desks, and desks for small spaces.