15 Must Have Gifts for Hamilton Fans

15 Must Have Gifts for Hamilton Fans

If you have a Hamilton fan in your life (or are one yourself), you know how much they love the hit Broadway musical written by superstar Lin-Manuel Miranda. They probably can’t stop listening to the soundtrack or complaining about how hard it is to get tickets. If you’re not sure what kind of gift to give your favorite Hamilton fan, this article covers the must-have gifts for every fan who can’t stop obsessing over the music and story of this revolutionary show. (You may even find something you want for yourself!)

Obviously, the absolute best gift you can get for any Hamilton fan is tickets to the show, but unless you have some amazing connections (or good luck with the ticket lottery), that’s not going to happen. Instead, this list covers the basics for new Hamilton fans and also includes cool and creative gifts for the fanatics that have been obsessed with the show since the beginning. Check out all of the Hamilton gifts below.

Must Have Gifts for Hamilton Fans 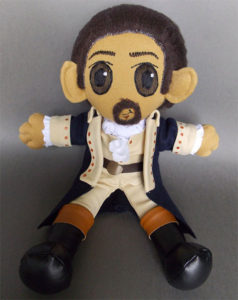 If you’re looking for original gifts for Hamilton fans, check this out. These cute little plushies are handmade stuffed dolls of characters from the musical Hamilton. Made by a private creator and artist, these dolls are unique and it’s guaranteed that even the most fanatic Hamilton fan won’t have them.

The first thing every Hamilton fan needs is the Original Broadway Cast recording of this amazing show. This music has won a Grammy and a Tony, in addition to the hearts of millions of fans. The 2 CD set comes with an insert featuring photos and lyrics from the show. This soundtrack features all 46 songs from the Broadway production and was produced by Questlove and Black Thought from The Roots.

This is also a great gift for anyone you want to turn into a Hamilton fan because they’ll be hooked from their first listen to this soundtrack. 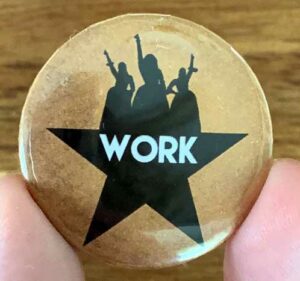 For fans who are ready to get to work, is this amazing Schuyler Sisters pin. Featuring the lyric from the song The Schuyler Sisters, it will remind any fan of the iconic music of this show. Perfect for pinning to a bag or jacket.

What better way to pay tribute to the Tony winning musical every day by looking at this gorgeous Hamilton wall calendar. It features gorgeous black and white images of the Original Broadway Cast, along with memorable lyrics and quotes from the show. It’s a great way to show your fandom at home or even at the office.

5. History Has Its Eyes on You Coffee Mug 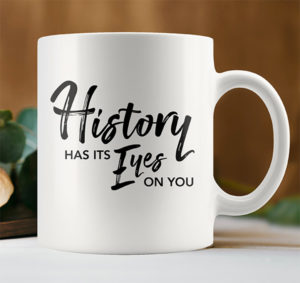 One of the lasting messages from the show is how the impact of our lives will be seen in the future and how history will remember us. This coffee mug includes the lyric History has its eyes on you. This is the perfect gift to remind the giftee to live every day working toward their goals.

Make it a fantastic gift set by including their favorite coffee or tea in the present.

6. Hamilton: The Revolution Book About the Musical

Known as the “Hamiltome” by fans, this book is the perfect gift for fans of this revolutionary musical. This book not only uncovers the history behind the story that inspired the musical, but also the evolution of the project that turned into the hottest modern musical. Lin-Manuel Miranda himself worked on this book to trace the development of the musical from his first performance at the White House in 2009 to opening on Broadway. It also includes footnotes for all of the lyrics, revealing inspirations behind the rhymes. This book is also chock full of behind the scenes and on stage photos. This is a must have for all true Hamilton fans. 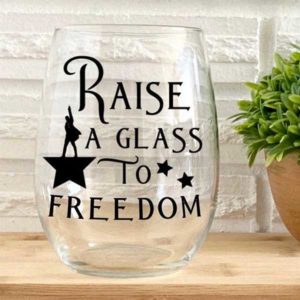 We can’t resist all of these Hamilton quote gifts. This stemless wine glass is perfect with the quote “Raise a Glass to Freedom.” This custom, made to order gift is a 20 oz stemless wine glass featuring permanent vinyl lettering. These glasses are perfect for enjoying a glass of wine, cocktail, or even soda (for underage Hamilton fans).

This is the book that started it all. While on vacation, Lin-Manuel Miranda read this biography of the founding father Alexander Hamilton which sparked the idea for this unique hip-hop musical. Now you can learn the real life history behind the Tony Award winning musical. 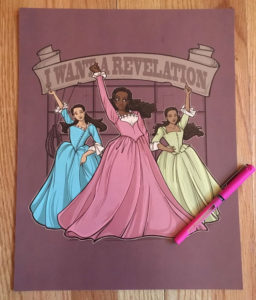 Another wonderful piece celebrating the characters of The Schuyler Sisters (Eliza, Angelica, …and Peggy), this print features a beautiful drawing of the sisters during their song “The Schuyler Sisters.” This print looks great framed and on the wall of any Hamilton fan’s home.

The Hamilton Mixtape was the original title of the musical that has now taken Broadway and the world by storm. Now it’s the name of a brand new album. Creator Lin-Manuel Miranda conceived this as a companion to the show’s soundtrack, featuring a combination of remixes of songs from the show by famous musicians, demos and unreleased songs from the show, and songs inspired by the musical.

The album features 23 tracks and includes artists such as The Roots, Busta Rhymes, Usher, Sia, Queen Latifah, Regina Spektor, Kelly Clarkson, Alicia Keys, Ashanti, Ja Rule, John Legend, Chance the Rapper, and more. This CD is a must have for all Hamilton fans, and since it’s not out until December, it makes a great Hamilton gift this Holiday season. 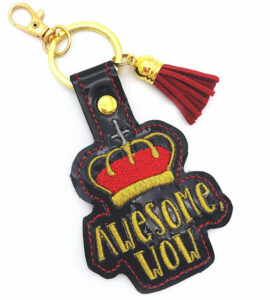 One of the most beloved side characters in the musical Hamilton is King George. Played by Jonathan Groff in the Original Broadway Cast, this keychain captures one of his perfect lines of sarcasm. This line is sung in response to America fighting for and winning its independence from England. Better than the Hamilton merchandise you can buy at the theater, King George fans will absolutely love this keychain.

Many fans love the youngest Schuyler sister, Peggy. This shirt is in honor of her most famous line from the song “The Schuyler Sisters” where she bursts in saying “And Peggy!” The shirt is available in 5 colors and men, women and youth sizes, so you can buy it for any fan who can’t get enough Peggy in their life.

If the Hamilton fan in your life also loves collecting Funko Pop! Vinyl figures, then this is the absolute must-have gift you should buy them! Funko has released their own set of vinyl figures based on the characters from Hamilton. The full set includes 6 figures: Alexander Hamilton, Aaron Burr, Angelica, Eliza, Washington and Peggy.

Hamilton Gifts for coloring book fans just got a lot more interesting. This brand new release is an adult coloring book covering the life of Alexander Hamilton. It includes many scenes made famous by the musical Hamilton, like the Battle of Yorktown, Hamilton moving to New York, and the wedding of Alexander and Eliza. Any Hamilton fan will enjoy de-stressing by listening to the Hamilton Official Broadway Recording and coloring in this awesome, historical coloring book. They can even add their own hip-hop flourishes, or write in the lyrics of their favorite Hamiltunes.

Don’t forget to include colored pencils, pens, or markers to create an unforgettable gift. 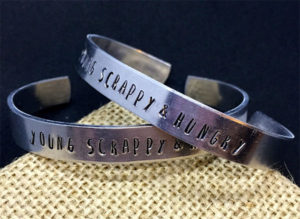 Jewelry is a great option for Hamilton musical gifts, especially when they feature lyrics from the show! This cuff bracelet features the beloved line “Young, scrappy, and hungry” from Alexandr’s song “My Shot.” This not only an awesome Hamilton gift, but it’s a great way to give a little motivation to young artists and writers at the beginnings of their career. Just like Hamilton, they can use their energy and desire to make big things happen in their life and for the world.