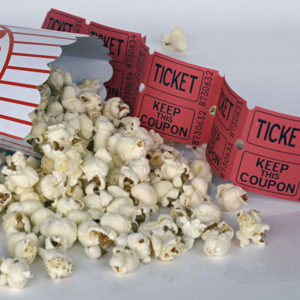 Writing is a tricky thing to translate to the silver screen. The act of writing itself is not exciting to watch. It’s usually just the writer with a pad of paper or a computer, typing away or just staring off into space. There isn’t much to watch. So often good movies about writers are hard to find. But they exist and they can often be an inspiration for struggling writers. These movies about writing make great gifts for writers or just a fun movie to watch at home on a Friday night. Check out our recommendations below.

This classic film from 2002 is well known for Nicole Kidman’s Academy Award Winning protrayal of the famous British writer Virginia Woolf. But The Hours is more than just a bio-pic. Based on the Pulitzer Prize winning novel by Michael Cunningham, the movie follows three different women in different times connected by Woolfe’s book Mrs. Dalloway. It depicts a single day in the life of Virgina Woolfe in 1923 as she writes her novel, house wife Laura Brown reading the novel in 1951, and Clarissa Vaughn preparing for a party in 2001 New York. The resulting moving is an emotional and moving experience that highlights how literature can connect lives. Every performer gives a knock out performance, especially Kidman as Virginia Woolf.

For writers, there is plenty to enjoy. The peek into day-to-day life as Woolf struggles through writing and her mental illnesses are incredibly relatable to many artists. It’s a well-crafted story that blends reality (Laura Brown is based on Cunningham’s own mother) with fiction. Overall, it’s a powerful rumination on loss, personal struggles, fear, and suicide. Check out the trailer:

If you’re looking for a movie about writing on the opposite side of the spectrum, this might be something you enjoy. Orange County is a comedy about a high schooler named
Shaun Brumder (played by Collin Hanks) lives the typical carefree SoCal lifestyle. This all changes when he discovers a novel on the beach that changes his life and makes him want to become a writer. Through a series of unfortunate events, he is rejected from his choice school of Standford, where he wanted to study under his favorite author. What follows is a hilarious adventure as Shaun and his brother (played by Black Jack) attempt to get him into his dream school.

This movie is great for aspiring writers and experienced ones alike. They’ll easily relate to Shaun’s enthusiasm and his desire to get away from home and achieve his literary dreams. John Lithgow has a brief and hilarious role as Shaun’s father who can’t understand why his son wants to be a writer. You may think this is just a goofy teen comedy, but when it was released, Roger Ebert described it saying: “It will sound like the kind of movie that, if you are over 17, you don’t usually go to see. But it isn’t. It’s one of those movies where the description can’t do justice to the experience.” Check out the trailer.

Most of Stephen King’s books end up with silver screen or television adaptations and because his characters are so frequently writers, there are plenty of Stephen King movies about authors. We’ve limited ourselves to just one for this list and we think this is the best of the bunch. Misery is the ultimate horror story for any published writer. This psychological thriller stars James Caan as famous romance novelist Paul Sheldon. While driving in a blizzard, his car wrecks knocking him unconscious. In what seems like a lucky turn he is resuced by Annie Wilkes (played by Kathy Bates), a nurse who happens to be his biggest fan. A precarious situation turns even more scary when Wilkes buys a copy of Sheldon’s latest book and discovers her favorite character has been killed.

The movie is as tense and frightening as the novel it’s based on. Kathy Bates is absolutely marvelous as the deranged, obsessed superfan–she was awarded an Academy Award and a Golde Glove for her performance. Misery is a must see for writers who are horror fans. Check out the trailer:

If you’re looking for movies about writers that are closer to biographies, then Capote is a must see. Starring the late Philip Seymour Hoffman as the well know writer Truman Capote, the movie follows the events that transpired while he wrote the book In Cold Blood. Hoffman is tremendous in the role of the writer, for which he won 17 awards, including the Oscar for Best Actor.

When it was written, In Cold Blood was one of the books that helped establish the non-fiction novel genre. As detailed in the film, Capote and his friend Harper Lee (played by Catherine Keener) traveled to Kansas to learn more about the tragic murders of the Clutter family in 1959. The movie gives great insight into the writer’s process (great for non-fiction writers and journalists) and also explores what happens when a writer becomes entangled with the story he’s following. This critical darling is an amazing movie for writers and readers alike to enjoy. Check out the trailer here.

Chances are you’ve never heard of this movie, but if you’re a writer you have to watch it. This smart, indie dark comedy is the perfect encapsulation of the post-college millenial experience for writers. Emma Roberts plays Amy, a recent college grad who is convinced she is destined to be a famous poet. Entering the real world she realizes no only is success harder to find that she expected, but making money is a challenge as well. Her parents push her to get a job and she ends up working at a sex shop (hence the title). She also meets her favorite poet (played by John Cussack) and tries to convince him to mentor her, which teaches her more than she expected.

Throughout the movie, the somewhat naive Amy meets her fair share of adult challenges as she tries to figure out her place in the world and how to be successful in her writing career. Aspiring writers and old pros alike will enjoy this funny and even moving film. Check out the trailer below:

Stranger than Fiction is a unique film that follows a writer (played by Emma Thompson) who has writer’s block as she tried to figure out how to kill the main character of her novel. At the same time, the movie is following the story of Harold Crick (played by Will Ferrell) who one day hears a woman narrating his life. It turns out that Harold is the character in the novel and he must figure out how to keep the author from killing him. At the same time, Crick is an IRS agent auditing a baker named Ana (played by Maggie Gyllenhaal). The film follows all of the ways these characters interact with each other resulting in a quirky and moving film that explores the creative process.

This movie is a departure for Ferrell, often known for comedic parts playing a subtle and nuanced character in Crick. This drama has many funny moments, but it really comes alive through the performances of the actors and the innovative story. Check out the trailer.

As we’ve said before, some of the best movies about writers are biographies or autobiographies. Adaptation is an interesting movie to describe to people who haven’t seen it as it is an autobiography, sort of. This metafilm is a great movie for writers as it actually explores the writer’s block experienced by Charlie Kaufman when he tried to adapt a non-fiction book by Susan Orleans. Nicholas Cage stars as Kaufman (and his fictitious twin brother Donald Kaufman) and Meryl Streep plays author Orlean. The story is marvelous to watch as a writer because of the creative blending of fiction and fact and the deep exploration of the creative process.

This original and outrageous comedy can be a great inspiration for writers. This is definitely a must watch for screenwriters and writers of non-fiction.

Fear and Loathing in Las Vegas

If you’ve never seen Fear and Loathing in Las Vegas, it is essential viewing–especially for writers. The movie is based on the novel of the same name by Hunter S. Thompson. The book is based heavily in autobiographical experiences blended with fictional elements (known as his trademark gonzo journalism). The film follows the story of Raoul Duke (played by Johnny Depp) and Dr. Gonzo (played by Benecio del Toro) as they go on a drug fueled trip to Las Vegas to write an article about the Mint 400 motorcycle race.

In addition to amazing performances by the whole cast, this cult film is a great rumination on the 1960s counterculture movement and the American dream. Even though it’s billed as fictional, it’s a great peek into the life and adventures of Hunter S. Thompson as he worked as a magazine journalist in the early 1970s. This is a great movie for writers, especially those interested in non-fiction, essays, and magazine writing. Watch the trailer.

American Splendor is a bigraphical movie based on the auto-biographical comic book series by Harvey Pekar. Paul Giamatti stars as Pekar in this inventive comedy that blends the fictional portrayals of Pekar and his wife Joyce Brabner with appearances of the actual couple. Illustrations and other comic methods make appearances in this film as well.

In addition to the splendor of the creative storytelling modes, this is an excellent presentation of a writer struggling through miserable jobs and unfulfilling everyday life while trying to create art and find meaning. This is a great movie for writers at the beginning of their careers and those interested in comics and graphic novels. Check out the trailer below:

The Dead Poets Soctiey is a movie loved by Robin Williams fans. In it, Williams plays an English teacher at a conservative Vermont boarding school who changes the lives of his students by teaching them poetry. A group of boys restart an unsanctioned club called the Dead Poets Society where they get together to read poetry and write their own poems.

This fantastic film features one of William’s best performances in an inspiring story. It’s great for poets and young writers, plus makes a nice nostalgic trip for older writers as well.

Check out the trailer.

Looking for more ideas of movies to watch? Check out the 10 funniest documentaries of all time and spellbinding mystery documentaries.